The closing of Altorado appears to have been providential. Without a ministry to tend to, the spring of 1914 becomes a chance for Walter to return to England to visit family and friends and an opportunity for Harold to travel with him.

The years between 1910 and 1914 are filled with significant events for Harold’s family; his parents take several trips, his older sister Edna marries (in 1912) and the following year, she and her husband have a baby (the first of the next generation). In April of 1914, Harold turns eighteen.

Harold, photo taken in 1914. Back stamped ‘US Postcard’

Perhaps the trip was in celebration of his coming of age. Whatever the motivation, his parents could not have asked for a better travelling companion for him – Walter is a minister, he is someone older and more experienced in travel and he has respectable connections on the other side of the ocean.

There’s no trace of the letters that must have criss-crossed the prairie in 1913, but plans were made and tickets were purchased. In late April 1914, the young men travel to New York City where they board the RMS Cedric and sail third class to England. They land in Liverpool on May 1st, 1914. 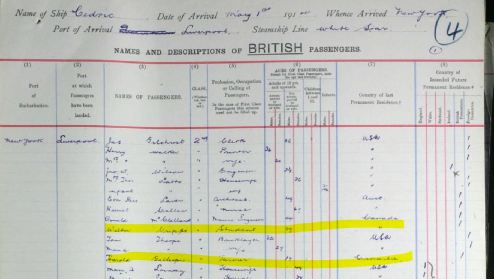 There is a postcard of the R.M.S. Cedric in Harold’s collection and it is possible to gain some basic details from the ship’s manifest so I couldn’t resist straying a little to find out more about this White Star ocean liner and the voyage. After all, it is only two years since the Titanic disaster and Harold and Walter are recorded as travelling Third Class (isn’t that the same as steerage?) I wondered how much had changed for transatlantic travellers in the two years since and how much had not.

RMS Cedric postcard 1914. Note the old style sailing ship being pushed out of the picture.

R.M.S. Cedric was the second of the White Star Line’s ‘Big 4 ships built by Harland  and Wolff (the same company that built Titanic). New York – Liverpool was her regular run until the war broke out then she, like so many others, was refitted for carrying troops. It could carry just under 3000 passengers, 2300 of whom would travel in Third Class accommodation. The voyage took five days.

One of the first things I found online is a site with brochures depicting the interiors of the Big Four. The interior of Third Class on the Cedric doesn’t look too bad (you’ll need to scroll down to the photos in the linked site).

Thankfully there were also changes in Maritime  regulations and practices including:

The first International Conference for the Safety of Life at Sea met and signed the agreement bring about these changes in January 1914.

Less formally, but perhaps more importantly was the change in the competitive culture of the commercial lines in making the crossing. Transatlantic crossing times increased slightly after the Titanic disaster.

Harold and Walter arrive safely and in style.

5 thoughts on “All Aboard the RMS Cedric”