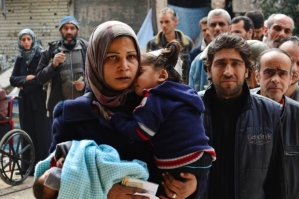 Residents queue up to receive humanitarian aid at the Palestinian refugee camp of Yarmouk, in Damascus March 11, 2015. (Reuters) 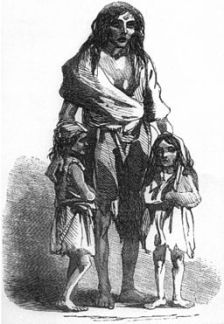 My grandfather’s paternal grandparents were Irish. Our family’s always known this, but their exact origins or any of the circumstances of their immigration to Canada were not known. In the past couple of years I’ve uncovered many of the details of their journey from the old country to the new.

In light of the ongoing plight of refugees from Syria, I feel it’s important to tell their story and examine the details of their journey to put some perspective on circumstances from the past and the present.

John Gillespie and Margaret Hillis were from the north of Ireland. While 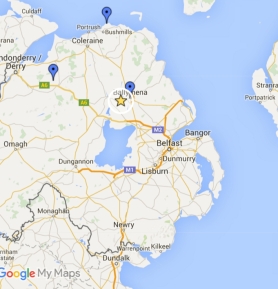 the exact dates and places of their births are still not known, there are records of their marriage on 13 DEC 1856 in Ahoghill, Antrim Co. at the 1st Ahoghill Presbyterian Church.

Why they left Ireland is unclear. There were a number of things happening at the time that may have influenced their decision.

So, it’s highly likely they went to Canada, not as refugees escaping starvation as many Irish had done during the Potato Famine years (1845-1852), but to escape poor living conditions and make a better life for themselves – they were what we would now call economic refugees.

In the spring of 1858, they travelled to Liverpool and bought tickets to sail to New York. The ship they sailed on was named ‘the Constellation’. John and Margaret were two of 685 passengers on board that voyage and like most immigrants, they were travelling Steerage Lower Deck. Things would have been tough on board, but at least they had the resources to choose the more expensive route via New York, and avoid the ‘coffin ships’ that sailed straight to Canada.

They were lucky with their choice of ship too. The Constellation (scroll down on the linked page to find its description) was larger than most ships making the voyage – in fact, the largest packet ship to make the crossing when she was first launched – so it wouldn’t have been as bad as some ships.

In previous years, unscrupulous companies maximised profits by failing to supply the required minimum rations for passengers or the required medical examinations before allowing passengers to board. Many ships carrying immigrants during the famine years had high mortality rates (some as high as 30%).

Five years earlier, the Constellation’s owners had booked over 900 people for the voyage. By the time they reached New York, over 100 of them had died. By 1858, when John and Margaret sailed, regulations regarding standards on immigrant ships from Europe were being more regularly enforced, making the crossings much safer.  Only three people died on the voyage.

But, the trip wasn’t all smooth sailing. The Palmer List of Merchant Vessels records the Constellation encountered bad weather:

Ship CONSTELLATION, Mulliner, master, arrived at New York on 2 May 1858, from Liverpool 28 March 1858, with merchandise and 684 passengers, consigned to Charles Carow. “Been 20 days West of the Banks, with westerly winds. April 30, off Nantucket Shoals, took a pilot from boat MOSES H. GRINNELL (No. 1).”

They were at sea for 35 days. Twenty of those days were spent bucking winds off the Grand Banks of Newfoundland.

Still, luck was on their side in other ways. By the time they arrived in New York, the first processing station for immigrants, Castle Gardens had been operating for a few years. Instead of being left on the docks and at the mercy of ‘runners’ and criminals, Castle Gardens offered protection and a system for dealing with the thousands of people who arrived on the ships every day. From 1845-1890, between 8 million and 9 million immigrants passed through the processing centre (including John and Margaret). It was closed when the larger Ellis Island facilities opened. 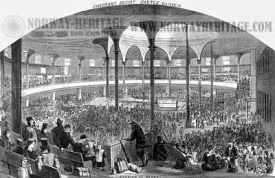 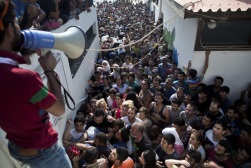 Migrants wait to be registered at the stadium on the Greek island of Kos.

From New York, John and Margaret made their way North to the Peel County area of Ontario, where they settled and became farmers.

While the 1861 Census records that neither John nor Margaret could read and write, at least they were able to speak English. This would have given them some advantage over the millions of other Irish who arrived looking for work but were only able to speak Gaelic.

Cartoon showing the Irish as obese, wasteful, violent, drug abusing monkeys. John Bull in the back ground gets ready to show Uncle Sam how to take care of the troublemaker.

Most of the Irish who immigrated were poor, illiterate and unskilled. Anti-Irish sentiment or Hibernophobia  (especially against Irish Catholics) was strong in both the United States and Canada.  We don’t know how much prejudice John and Margaret experienced during their years; they would have ‘looked Irish’ and ‘sounded Irish’ and that’s normally good enough for people looking to hate. They would have faced racism and prejudice excited by events like the Fenian raids.  I also imagine they would have drawn strength from settling and farming in a community of people who were similar to them in background and culture.

Our ‘boat people’ refugee ancestors were able to settle and find their place within the mosaic that is Canada today — even amongst the angst and prejudice that came with a tsunami-sized flood of refugees from Europe. I shudder to think what would have happened to our family if John and Margaret had not been given that opportunity. 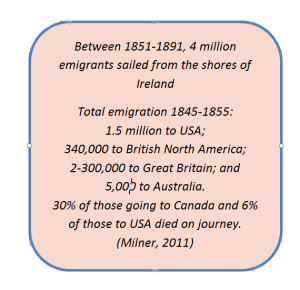 We were lucky. Why should we be the only ones?

Please note that each of the underlined weblinks is an opportunity to learn more about that specific facet of the story. Don’t miss out!